Best movies about economy and finance

Economy and finance  have all been depicted on the silver screen several times, and  I’ve done my best to identify the best movies about such issues.

Here is a collection of some of the best movies about economy and finance. They are also a way to bring complicated economic and business information to the general public. Please don’t hesitate to comment on any movie and tell your preferences. You can get more information about the movies by clicking on them.

Trading Places is one of the  funniest movies about the financial world ever made. Yet it’s precisely because it’s an Aykroyd comedy that the whole plot is sometimes senseless. Anyway, if you want to have a good time and don’t analyze too much, it’s a good choice to spend a sunday afternoon.

Some say the recent financial crisis proves that the world needs a new financial system, because this one is generating too much  poverty, social inequality, and despair. This is the case of a security guard for an armored truck, Jim (Dominic Purcell), who will give vent to his hatred against Wall Street speculators and a system that has ruined his life.

With other people’s money was  based on the play of the same name by Jerry Sterner. Lawrence Garfield, known as “Larry the Liquidator”  (Danny DeVito) is a prosperous corporate raider who has become wealthy buying up companies and selling off their assets. With the help of a computerized stock analyzing program, Garfield has spotted New England Wire & Cable as his next target. The struggling company is run by the benevolent and homey Andrew “Jorgy” Jorgenson (Gregory Peck) who is the primary employer in its small Rhode Island town.

Pi is an acclaimed “schizophrenic” thriller that has become a cult film over the years. It tackles issues such as maths, finance, God, nature… in a very original way. A brilliant mathematician teeters on the brink of insanity as he searches for an elusive numerical code that explains almost everything.  Soon he will draw the attention of dark characters who represent even darker interests. Rogue trader (1999) He’ll risk everything to beat the system!

It is a riveting true story about how greed, excess and high-stakes gambling brought down one of Britain’s oldest and most successful financial institutions. When futures trader Nick Leeson (Ewan McGregor) is sent to Singapore by the 200-year-old Barings Bank, he dreams of making a killing in the stock market. Nick’s firm believes he is the most successful trader they’ve ever employed…but he secretly begins to divert vast amounts of their money to cover his risky financial wagering. With enough debt to match his desperation, Nick risks everything in a frantic bid to beat the system and win back the money.

The wolf of Wall Street (2014) The great American picture of today! 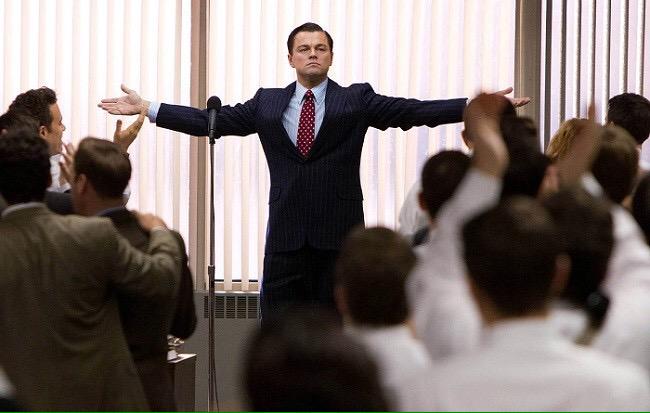 Movie based on the true story of Jordan Belfort, from his rise to a wealthy stock-broker living the high life to his fall involving crime, corruption and the federal government. In 1987, Jordan Belfort (Leonardo DiCaprio) takes an entry-level job at a Wall Street brokerage firm. By the early 1990s, while still in his 20s, Belfort founds his own firm, Stratton Oakmont. Together with his trusted lieutenant (Jonah Hill) and a particular band of brokers, Belfort makes a big fortune by defrauding wealthy investors out of millions. However, while Belfort and his colleagues enjoy a hedonistic brew of sex, drugs and thrills, the SEC and the FBI close in on his kingdom of excess.

Too Big to Fail is a U.S. television drama film first broadcast on HBO on May 23, 2011 based on Andrew Ross Sorkin’s non-fiction book Too Big to Fail: The Inside Story of How Wall Street and Washington Fought to Save the Financial System—and Themselves (2009). The film was directed by Curtis Hanson. It received 11 nominations at the 63rd Primetime Emmy Awards; Paul Giamatti’s portrayal of Ben Bernanke earned him the Screen Actors Guild Award for Outstanding Performance by a Male Actor in a Miniseries or Television Movie at the 18th Screen Actors Guild Awards. Read more…

“Greed is good” has gone down in cinema history as one of the most famous and ominous quotes. On the Wall Street of the 1980s, Bud Fox (Charlie Sheen) is an ambitious and impatient stockbroker, willing to make his way to the top. Admiring the power of the unmerciful corporate raider Gordon Gekko (Michael Douglas), Fox suduces Gekko into mentoring him by providing insider trading. As Fox becomes embroiled in greed and underhanded schemes, his decisions eventually threaten the livelihood of his honest  father (Martin Sheen). Faced with this dilemma, Fox starts quostioning Gekko’s coaching.

A college dropout gets a job as a broker for a suburban investment firm, which puts him on the fast track to success, but the job might not be as legitimate as it sounds.

Once Sullivan analyzes the data, he realizes the universal gravity of Dale’s warning – that the firm is so over-committed to underwater mortgage-backed securities that the total potential loss exceeds the firm’s total market capitalization value. In other words, the projected scenario means the firm will soon owe a lot more than it’s worth, and the market will be on the verge of an apocalyptic meltdown. What happens after this discovery is a series of sharply intense clandestine confrontations with each level of higher-ups recognizing the ramifications of the inevitable disaster, each one far more nuanced in character than we are used to seeing in films from Oliver Stone about greed and immorality. Blessedly, Chandor doesn’t stoop to the customary stereotypes in this corporate cage match, but what he does manage is capture the moral compass underneath each player by way of a cast that really delivers the goods with powerfully implosive performances. Read more.

SYNOPSIS: Martin is an average guy with an average job and a long standing girlfriend, but his life is turned upside down when he wins a quiz show and prizes in abundance that value almost 4 million dollars. However, the tax authorities expect to receive half the value of the prizes at the end of the financial year. Since all of the prizes are not in hard cash he starts a mad cap race to free himself from the sudden financial burden. But his life becomes a roller-coaster ride when his girlfriend starts spending the cash value of the prizes at the same rate he is frantically trying to sell them. …The Contestant ( Concursante

SYNOPSIS: The film describes an executive who becomes the CEO of a large bank, only to upset the bank’s board of directors when he begins to take unilateral control in the bank, laying off many of the employees and making a corrupt deal with the head of an American hedge fund. SCREENED/AWARDED AT: San Sebastian International Film Festival, …Capital ( Le capital )

In 2005, eccentric hedge fund manager Michael Burry (Christian Bale) discovers that the United States housing market based in subprime loans, is extremely precarious. Eventually he comes up with a shoking idea that will make him -and his investors- rich.

This drama, based on the book The big short: Inside the Doomsday Machine.

Lee Gates, a TV personality who advises his audience on trading and Wall Street is forcefully interrogated by  a grief-stricken bankrupt viewer who lost his money after a previous tip